Hotting up in the Corbières 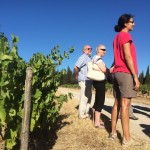 Our first stop of the tour was with Anne Lignères from Château La Baronne in Moux.  Always a pleasure to see Anne as she not only speaks excellent English, she also has a great sense of humour .  She needed all this good humour as she showed us her organic vinyards- some dating back 120 years.  She has had very little rainfall for a number of months and as a result her vines were very stunted with some grapes no bigger than peas.  As she has been organic and bio-dynamic for a number of years and knows her vines are strong enough to withstand the drought but her yeild will be much lower this year.  The group absoutley loved the visit – with the fascinating teracotta amphores and ‘eggs’ for both fermenting and ageing.  They loved her wines even more, especially the vermentino and her 100% carrignan.  A great start to the tour.

Free lunch in Narbonne – nothing nicer than dining like a local on a terrace -watching the world go by – luckily we left no-one behind as we headed out of Narbonne and had an interesting guided visit to the Abbey of Fronfroide followed by a tasting in their cellars of the wines produced there.  A happy but tired group then headed back in the bus to their home for the week – the Hotel Modern et Pigeon in Limoux. 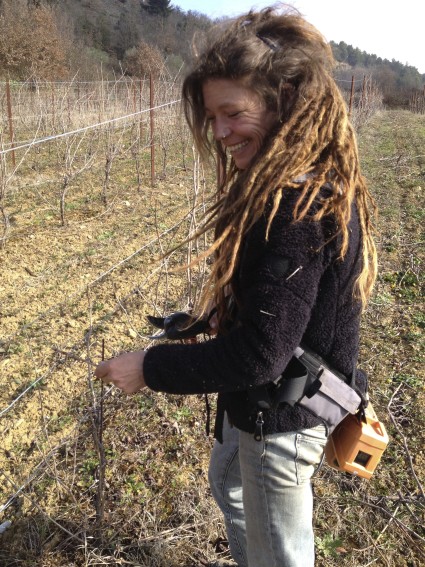 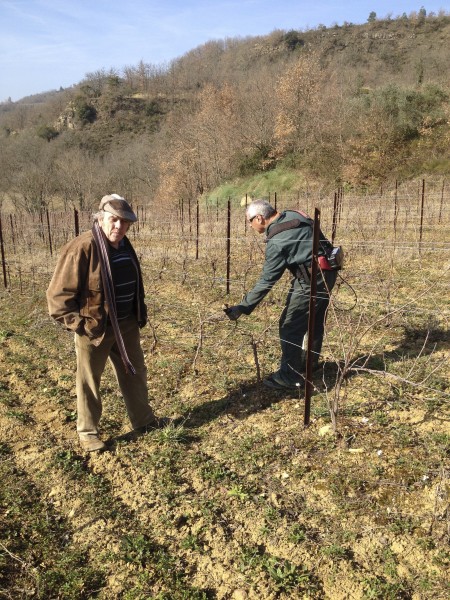 Jean-Luc and I went up to see some friends working in the vinyards last week. It was the end of February and winter nearly coming to an end but there was still plenty of work to do.

Phillipe is a ‘viticulteur’ – he grows his grapes and sends them to the cave of ‘Anne de Joyeuse‘ in nearby Limoux.  His vinyards are in an around the village of Roquetaillade, about 10km south of Limoux.  He has Merlot, Pinot Noir and Chardonnay vines.      Jane works for him part-time but all year round (full time during the harvest)  She takes her dog with her and a thermos of hot tea!  When she saw the photos she said she was surprised that she hadn’t snipped off some of her hair by mistake!

Also some photos of  vinyards in the Cotes du Roussillon Villages area, near Perpignan, shows some pruned and unpruned vineyards, all waiting to burst forth very soon with new growth.  Clear blue skies, views over the valley as far as Bugarach – I’m sure one of the reasons the wine here is so fantastic!!

Winter is pruning time in the vineyards.  No question of staying in next to the fireplace this winter, as this work, when the vines are resting is very important. It’s part of the long, difficult work for the ‘vigneron’ as it’s often done in humid  and cold conditions.  Pruning the vines is the way to prepare for the next harvest and here the technique is called ‘guyot’ pruning, where you can see Jane and Philippe leaving on the vine one branch with 10 buds  – called a ‘long bois’ and one small branch with 2 buds called the ‘courson de rappel’ .  The rest of the branches are snipped off and left on the ground, where Philippe later on grinds them up and leaves them as mulch.

This pruning is really important as it will determine the number of bunches on each vine and thus the size of their harvest.  Not enough grapes and the harvest is too small and will mean a loss for these mid range wines, which is what the majority of their market is made up of – often sold in the shops between 3.50€ and 6.50€.  Too many grapes and the quality is risked – thus also affecting the end product.

Difficult but essential work for sure but all part and parcel of life in the vineyards.